2020 was an incredibly tough year for many industries, except for maybe hand sanitizer and toilet paper. Commercial lighting was no different. As electrical utilities struggled to hit their energy savings goals, a record number of bonus rebates, 20% of the active programs in 2020, offered a bonus. Just as we've seen in previous times of economic turmoil, like the financial crisis of 2008, rebates increased to spur participation. Because of this, 2021 is shaping up to be a solid year for commercial lighting rebates.

74% of the US Offers A Commercial Lighting Rebate

As the adoption of LED lighting increases, we constantly get the question if rebate programs are going to continue. In some form or other, lighting rebates have been around since the '80s and will likely continue for the future. Even with the increased prevalence of LED technology, tons of older lighting technologies, like T12s and metal halide, are still being used in the US. Therefore, lighting rebates are still going strong in 2021.

Currently, 74% of the US is covered by an active commercial lighting rebate program. This percentage is lower than we usually see at the beginning of the year, typically 76 - 78%, but it still means most businesses in the country have a rebate available to them. The most significant change in 2021 is in Ohio, where the major utilities discontinued their rebate programs at the end of 2020.

For the first time in years, the average prescriptive rebate for LED products did not go down year over year, according to RebatePro. Historically, the rebate amounts for LEDs have fallen between 10 and 20% every year, so staying flat is a huge improvement. Below you can find the average rebates for the major LED categories. 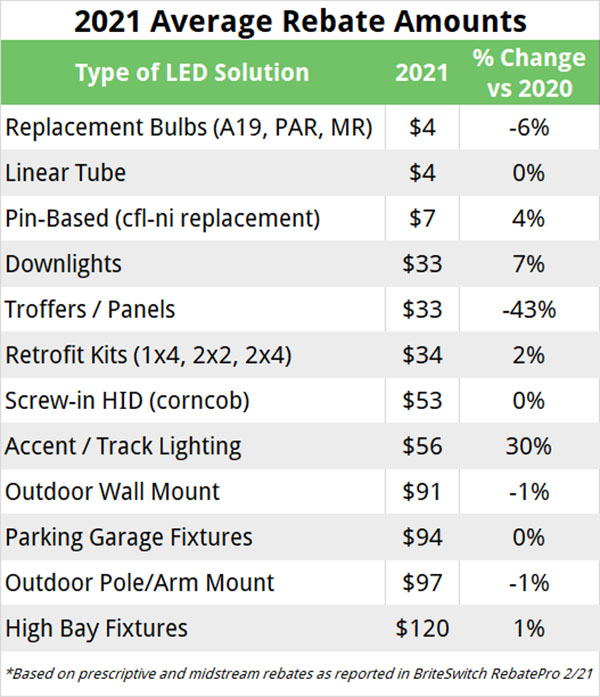 Rebates for LED Tubes remain at an average of $4 for a 4' tube. There was a slight decline of rebates for replacement lamps (A19, PAR, BR), but it was relatively minor, with a difference of just $0.25 between this year and last year.

For the most part, LED fixture rebates are on par with the levels we saw last year. The only exception to this trend is troffer rebates which unexpectedly dropped 43% versus the previous year. Now troffers and retrofit kits have the same rebate amount. It's not clear why troffer rebates changed, but we don't expect to see such a significant decrease repeat itself next year. Since the rebates for fixtures can be relatively high, make sure to pay attention to any cost caps that may apply.

Rebates for lighting controls have been remarkably stable over the years, especially when compared to LEDs. In fact, if you look at the rebates over the last 10 years for all controls, there has been no change in the average amounts across all categories. 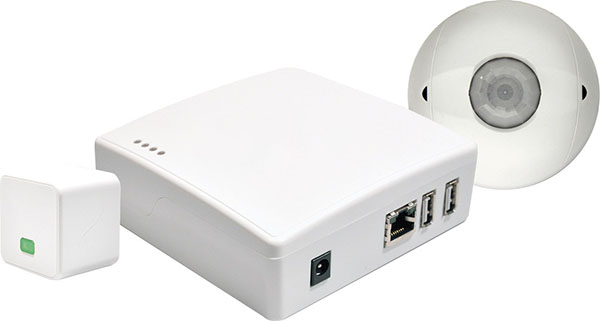 Be Aware of Changes in DLC 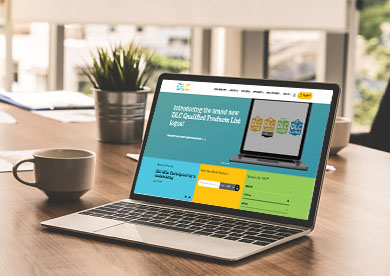 In 2020, DLC issued new technical specifications under the new version 5.0, which improved upon the specs of v4.4. The DLC originally slated the v5.0 transition for December 31, 2020, but they pushed it back until February 28th due to COVID. A majority of rebates, between 60 - 85% depending on the category, require DLC listing in order to get an incentive, so this certification is essential. If a program requires DLC certification and a product isn't on the DLC website when the application is reviewed, it will not receive a rebate. While many rebate programs may have offered a grace period during DLC transitions in the past, no program has implemented such a policy so far this year.

DLC v5.1 will get into effect early next year, and that will add new requirements for controllability in many types of fixtures. It's too early to tell how it will impact control requirements in rebate programs, but we expect it not to make a significant impact until 2022.

A majority of prescriptive and custom rebate programs require pre-approval. In response to COVID and everyone learning how to work at home, we saw that the amount of time to receive pre-approval and to receive checks both got longer in 2020. Since we file thousands of rebate applications a year, we record how long pre-approval takes for projects. On average, it took 22% longer to get pre-approval (now 22 days) and 40% longer to get the rebate check (38 days). Since we expect this trend to continue in 2021, make sure you give yourself enough time for pre-approval before the project begins.

Rebates May be the Key to Success in 2021

With tighter budgets and more conservative spending, rebates are as important as ever to getting lighting projects done in 2021. If you are working on any project this year, make sure you know if there are rebates available and what may be required. These rebates and incentives are a great way to do more with less money, and you should always leverage them.

If you are planning a project and need help with estimating and filing rebates, BriteSwitch can get you the most money with no hassle.

If you want to create leads and increase your sales with rebates, our RebatePro and Rebate Assistant tools can help you find and identify rebates for your customers.


Learn how to work with BriteSwitch 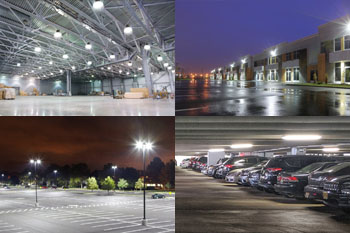 Which Lighting Products Get The Highest Rebates?